How to fall into murder...with Elizabeth Mapstone

The Coffee Stained Manuscript is proud to present a guest blog by Elizabeth Mapstone, an accomplished fellow author who has recently published The Amazon's Girdle – A mystery with a delicious twist!

HOW TO FALL INTO MURDER... with Elizabeth Mapstone

I never intended to write a murder mystery. The Amazon's Girdle began as a love story, with former film-star Jacques, mouldering in a corner of the Michelin-starred Paris restaurant he runs with his wife Louise, remembering his all-too-brief time with the Amazon, the one woman he truly loved. But she died. I realized, rather belatedly, I had to decide how.

A natural death, by cancer say, was out – Eric Segal and “love is never having to say you're sorry” (what rubbish!) had done that. Death in childbirth was possible, but my Amazon was a medical doctor, so improbable; and in any case, I didn't want to deal with the concomitant inevitable guilt. A road accident seemed too facile. Suicide was out. Murder suddenly became essential to the story: it was the obvious way for someone as strong as my original heroine to disappear from the scene; she'd never have bowed out for anything less.

This was a bit of a blow. I had a small cast of characters, but now I had to decide which of them was a murderer. Each one might have had a motive, but how is it that all are carrying on with their lives 17 years later? What happened? Was it perhaps one of those murders that went undetected?

Who dunnit? And who decides to investigate this late in the day? And why? Inevitably, it had to be the young daughter of the doomed love affair between Jacques and the Amazon, inspired by her own heroine, the beautiful and malicious French film-star Madeleine Marvell, who deliberately sets out to disrupt the apparently peaceful and successful life of her former husband Jacques.  Complicated? I'd say. But then murder mysteries usually are. And MM makes a delicious villain.

Given the way this story evolved in my head, it is clear that the book is not structured like a classic murder mystery. Working out whodunnit, I think, is not difficult for those who enjoy the challenge. But the motivations of all possible suspects are psychologically sound, and several reviewers have said they were surprised, even shocked at the outcome. Which is hugely gratifying!

Would I ever write another murder mystery? I'd have said NO, until I launched this one into the amazon.co.uk ether (where else?). It's been fun. So when I have finished my quiet psychological novels (The Porcupine's Dilemma is now with an agent), I might dip another toe in those dangerous waters. Marissa writes them so successfully, I shall ask her advice.

Elizabeth Mapstone has lived in France, Belgium, Canada, and now England, and is a bilingual veteran of numerous occupations: in restaurants, offices, shops, news reporter, radio interviewer, teacher, translator, political commentator, book reviewer, and theatre critic. A new mid-life career began with a doctorate from Oxford, and she became Founding Editor of The Psychologist, then a psychotherapist, and published two books with Random House: War of Words, on the psychology of arguing; and a self-help book that really works, Stop Dreaming, Start Living. Now retired, she is writing fiction, has published several short stories as well as a mystery novel The Amazon's Girdle, and once won the Luigi Bonomi prize for the best opening pages to a novel (soon to appear in The Porcupine's Dilemma). You can buy The Amazon's Girdle here. 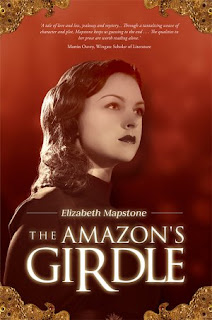 For more information about Elizabeth and her books see: www.elizabethmapstone.co.uk